Photo-exhibition “Preserving traditions. Unique life-style of Japanese Ainokura Village” has taken place as one of events of Cross-year of Culture of Japan in Russia from 13 February to 11 March, 2019 at the Cherepovets Library n.a. V.V. Vereshchagin. Every citizen could hear the both the actor talk about gassho-zukuri houses were officially designated as a World Heritage site and lecture about villager’s life and traditional crafts such as Japanese papermaking washi and sericulture. Media partners of photo-exhibition were “Autoradio – Cherepovets” and radio “Energy”. https://www.ru.emb-japan.go.jp/japan2018/ru/event/mo7279-ru.html

11 December, 2018the HSE Institute for Oriental and Classical Studies in Moscow was taked place the lecture “Preserving traditions. Unique life-styles of Japanese Ainokura and Russian Nyonoksa Villages”. How the people of these villages lives? What and how they preserve for generations to come? We had a try at these and other questions to answer during the lecture.

Demo lesson “I see Japan” is come at Arkhangelsk middle school № 20. The pupils could heard a tale about Japan, see the pictures from Toyama Prefecture and some Japanese traditional things like yukata, noshibukuro, ningyou etc. Everyone was happy to study the one of the haiku by Kobayashi Issa:

Photo-exhibition “Preserving traditions. Unique life-style of Japanese Ainokura Village” has taken place from 10 May to 31 May, 2018 at the Chambers of Averky Kirillov in Moscow. Address: Bersenevskaya emb., 18-20-22, bld.3 “Ainokura Village is located in Toyama Prefecture among the mountains, surrounded by natural beech woods. Ainokura gassho-zukuri houses were officially designated as a World Heritage site. Gassho-zukuri architecture is the result of wisdom and ingenuity of villagers who built the houses with sharply angled roofs to prevent heavy snow accumulation, a serious problem of this region. The houses logs were joined only with straw or ivy ropes rather than nails or iron clamps. Such rops help preserve the house for a long time since they accumulated soot from the smoke of the irori and become as hard as steel. Thus they  developed insect-repellent as well as preservation effects. The quality of natural woods, work of the builders and rational constructions were so high that in 400 years the future generation continue to live in gassho-zukuri houses…”

Photo-exhibition “Unique life-style of Ainokura Village” has taken place from 26 March to 23 April, 2018 at the Institute of Oriental Studies of Russian Academy of Sciences in Moscow. All Guests could see 32 photos from Ainokura Village (Chubu region), which was isolated geographically very long time… Address: 12, Rozhdestvenka street, 3-nd floor, Reference room of Institute of Orienal Studies of RAS.

Photo-exhibition “Unique life-style of Ainokura Village” has taken place from 14 February to 06 March, 2018 at the HSE Institute for Oriental and Classical Studies in Moscow. For additional information in Russian: https://iocs.hse.ru/news/ 215813372.html

Photo-exhibition “Daily life and traditions in the modern streets of Japan” have moved to Severodvinsk, Arkhangelsk area. It was opened on  January 11 and continued till  February 18, 2018.  I’ve got new experience as guide for gymnasia pupils. I have conducted 10 excursions for children on first two weeks and got a lot of very positive emotions. Dear Gymnasia pupils! Thanks for your kind attention and very interesting questions!

Photo-exhibition «Daily life and traditions in the modern streets of Japan» has taken place from 14 September to 06 October, 2017 at Marble Hall of Library Foreign Literature in Moscow. The exhibition guests who visited in Japan previously noticed that Author could  pass along an spirit of this country. Who has never been there could meet with new culture and expand their knowledge about a life in our planet.

Thanks a lot the Organizer and all Exhibition Guests!

The first exhibition from the Japanese series has taken place within the 18th conference “History and Culture of Japan” from 17th to 19th of  February, 2016 at Russian State University for the Humanities. An ideological inspirer of the Conference is the Russian historian-japanologist Alexander Meshcheryakov. I have offered Mr. Meshcheryakov to add the pictures to the conference. He has looked at the printed by a small format photos and has given OK.

This conference collects the scientific from different Russian and Japanese universities who are studying Japan deeply, visiting there with the cameras and following having own pictures, and so I worried to much. However exhibition references were very good.

The second photo exhibition of “Japanese” series took place in April, 2016 at Studio-SURO, Moscow. That was not just a photo exhibition for me, but a chance to pay tribute and thankfulness to my Japanese Friends: Yutaka Yoshizawa, Hideki Goto, Masatoshi Kitamori, Tsuneo&Aiko Tanji and Nobuo Umeda, who showed me Japan. 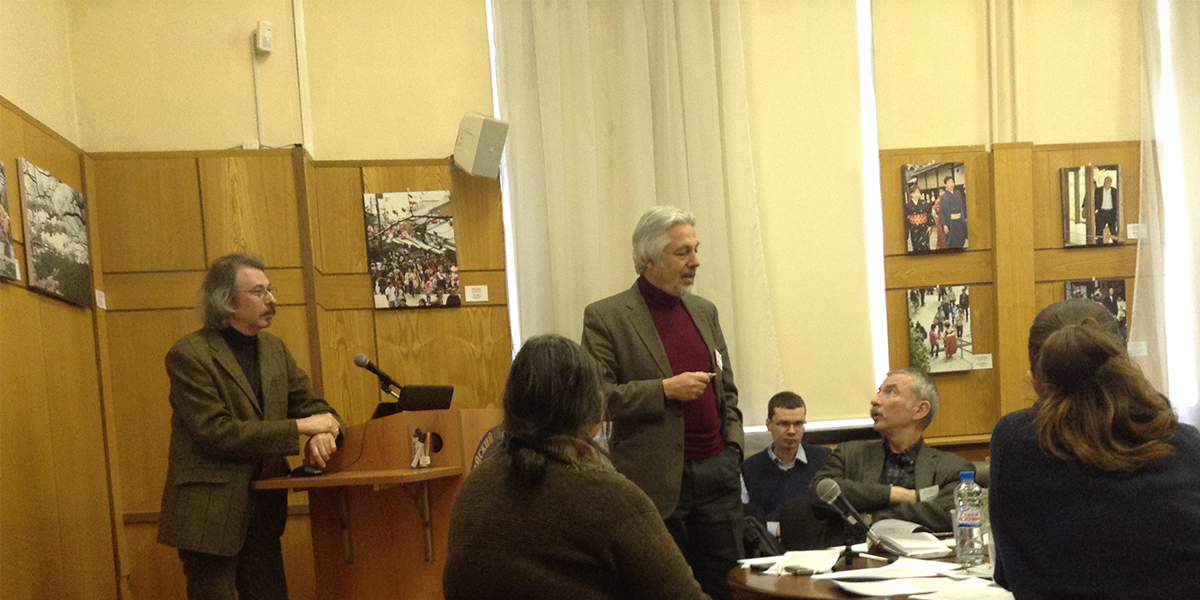 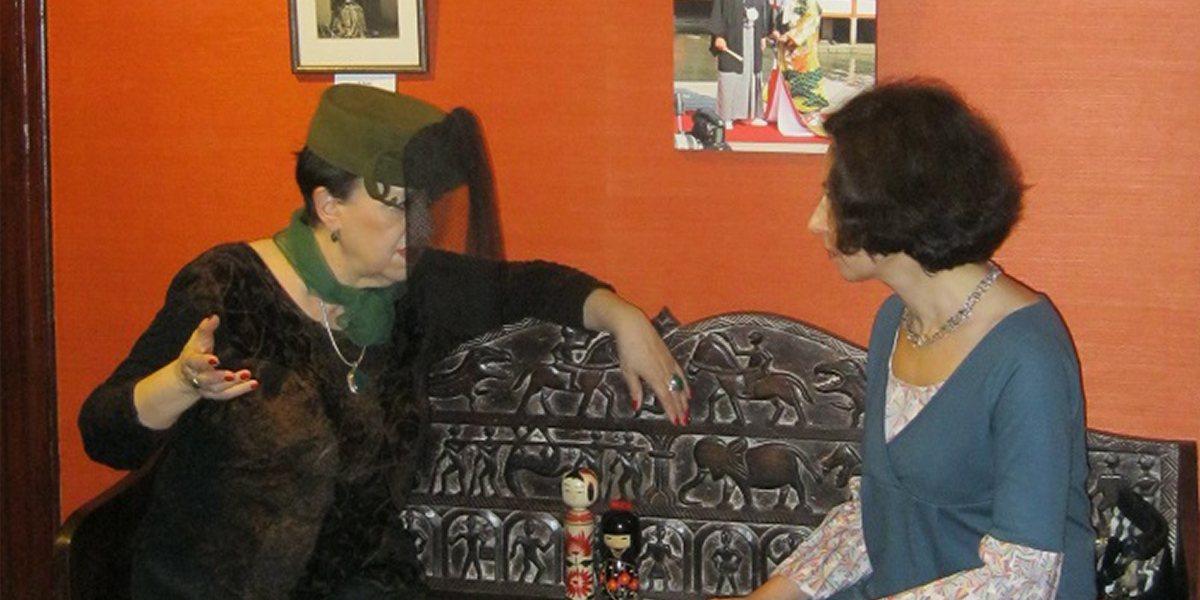 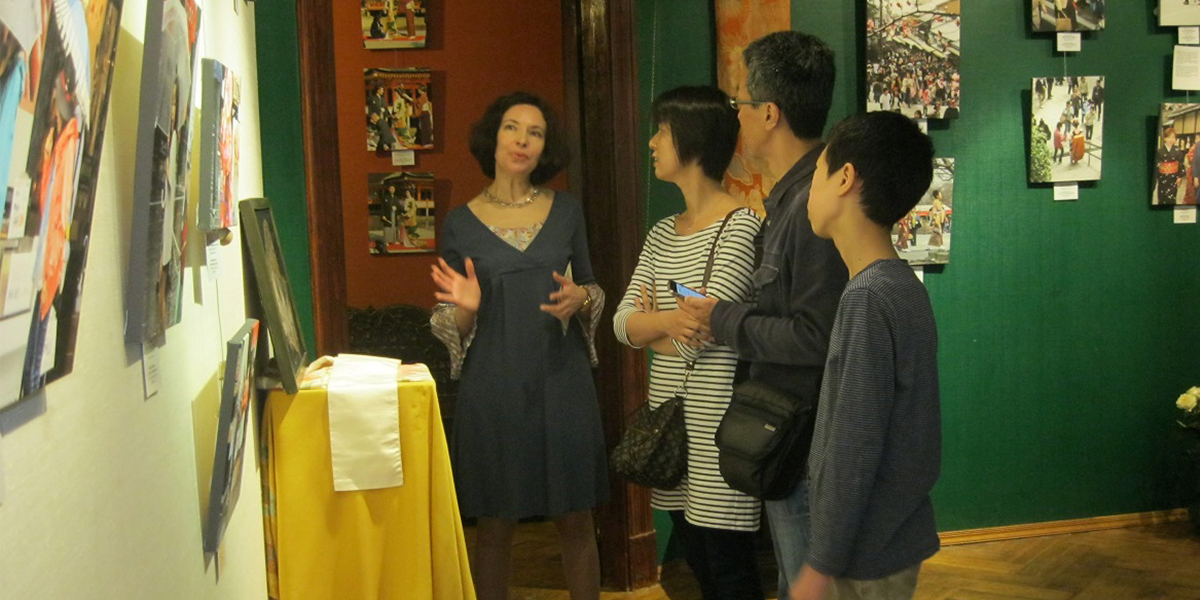 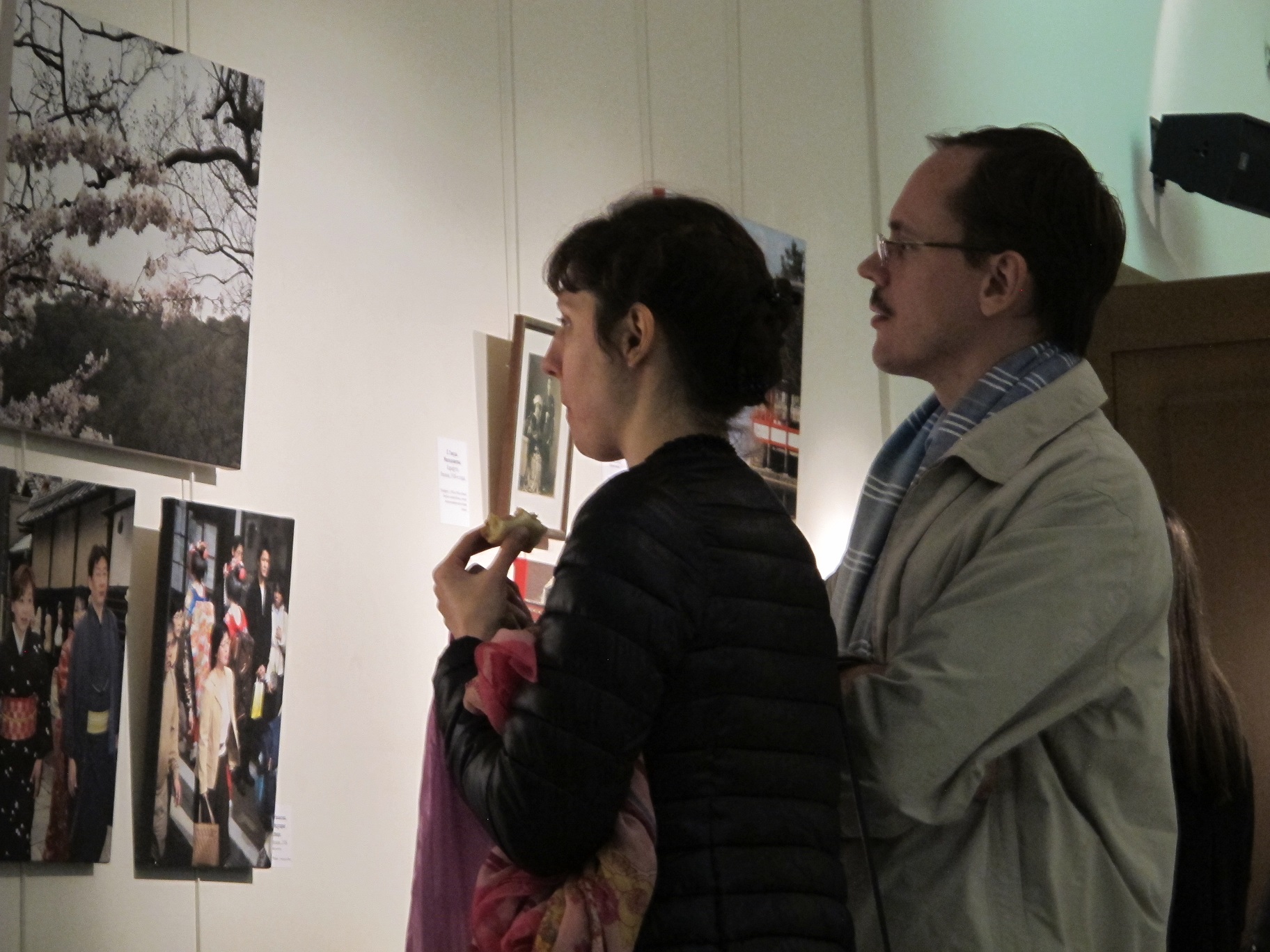 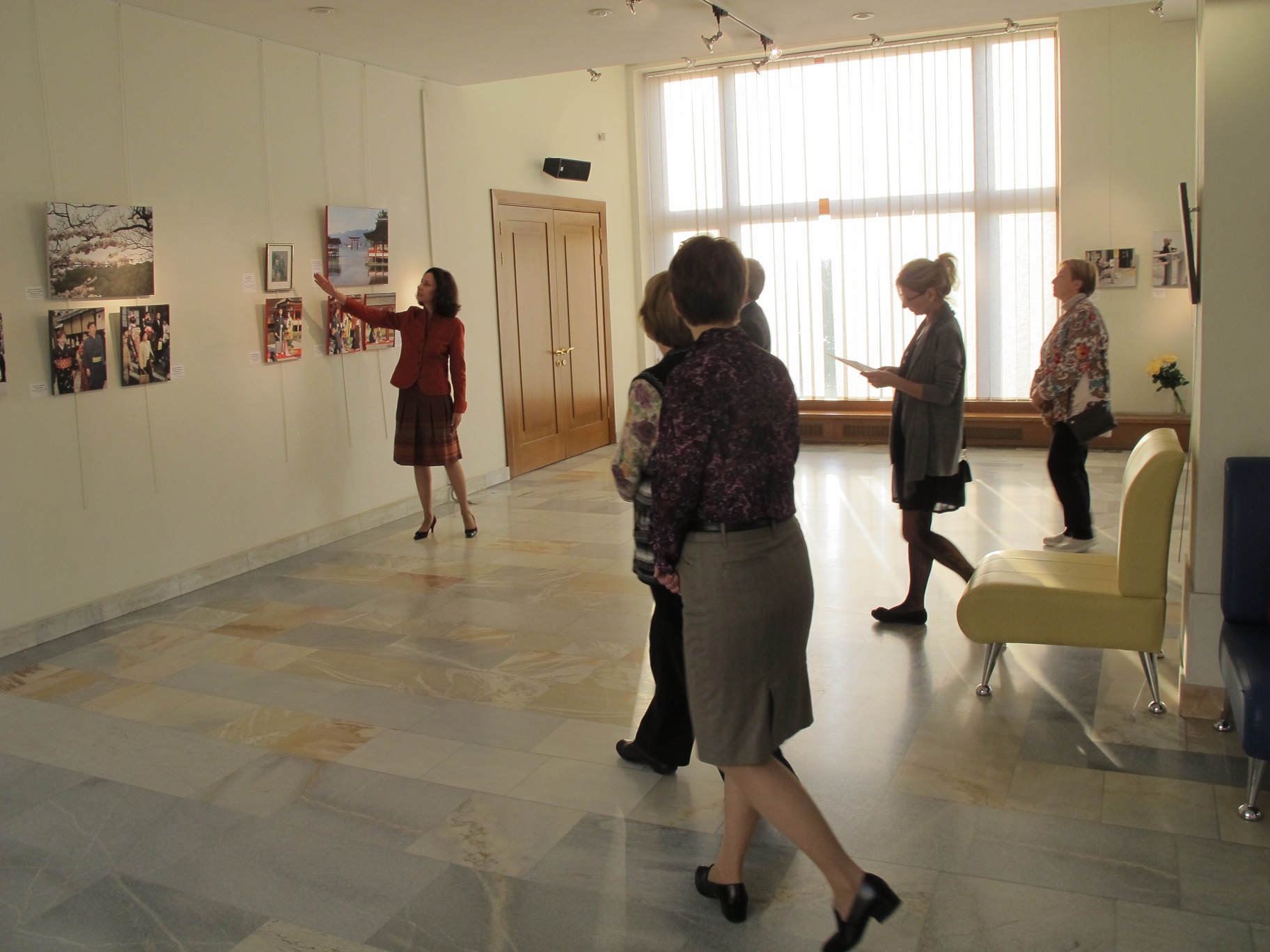 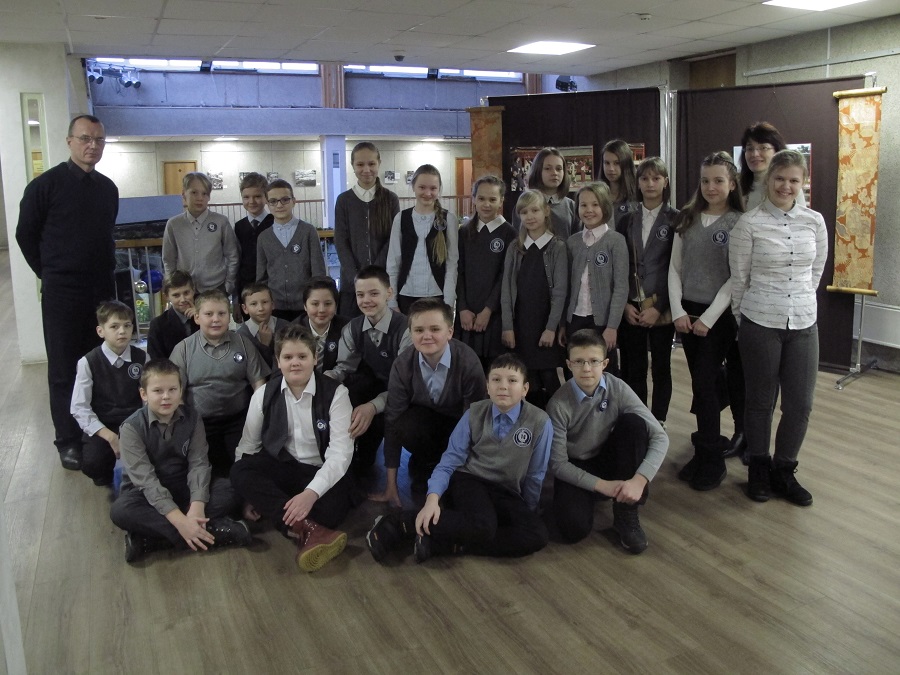 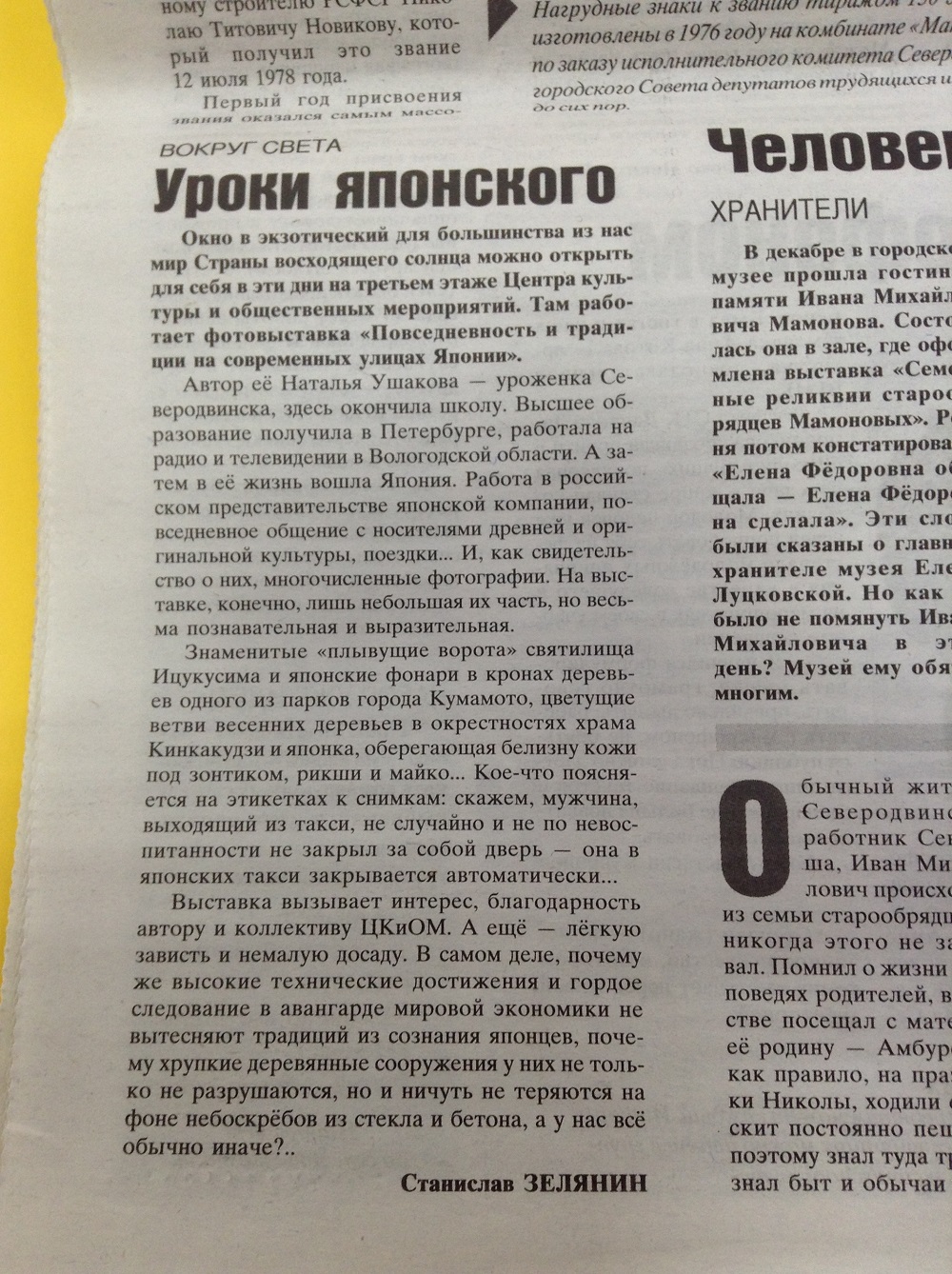 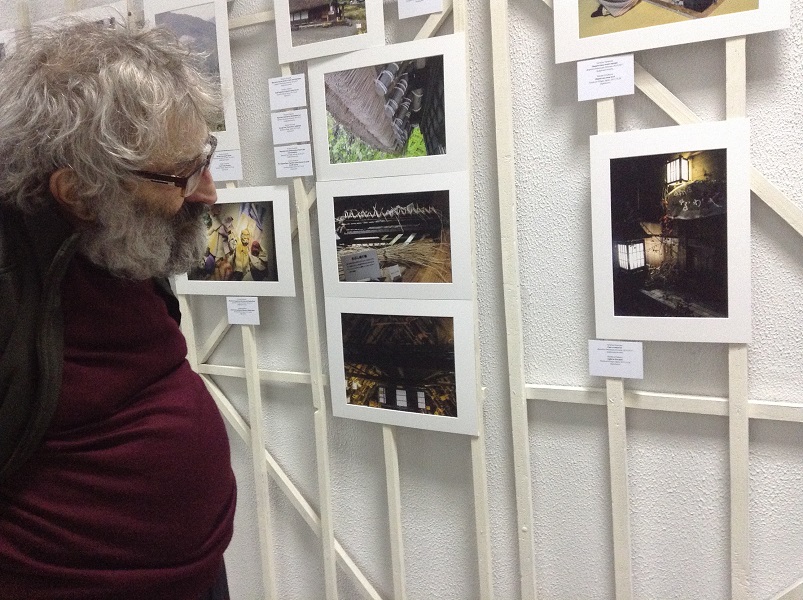 At the exhibition "Unique life-style of Ainokura Village"
The HSE Institute for Oriental and Classical Studies, Moscow. 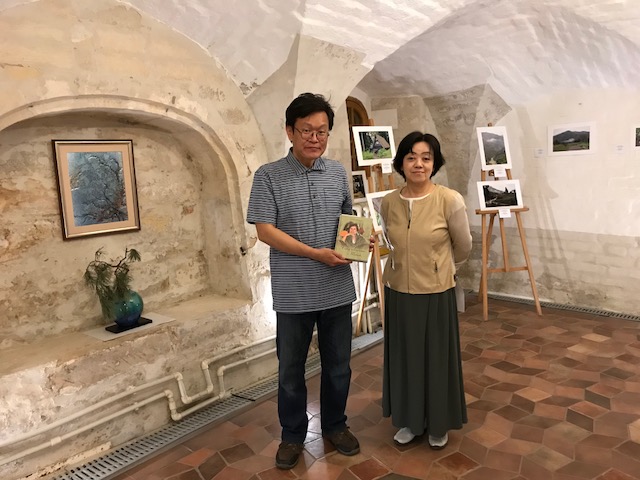 Ms. Somata Hitomi and Mr. Koyama Takashi at the exhibition
the Chambers of Averky Kirillov in Moscow
Thanks
Tatyana Metaxa isn't late
Interesting case
The highlight of the opening
Conclusion

With the help of many people the exhibition passed successfully: Suren and Lyudmila Mkrtichan, who helped to create an exposition and warm atmosphere; their children – Levon and Lika – giving correct and timely advices; Tatyana Rymar, who had taken the pictures and made the website of “SURO” studio; Ekaterina Ushakova and Sabina Bnayat, who edited the English version of texts; Natalya Golubinskaya, who played the Welcome piece on the traditional Japanese musical instrument KOTO; Alexander Minakov, who made a mix of Japanese songs for background music; Vladimir Baranov, who delivered all pictures to the exhibition; staff of the café “Drink Coffee”  who made tasty cakes for a buffet reception and all guests of the exhibition: who had come, watched and wrote their feedback.

Tatiana Metaxa is the famous orientalist, the First deputy Director of the State Museum of Oriental Art has arrived to an exhibition first. Having entered the hall, and stopped at one of the pictures, she asked astonished: “Is it photo? It is like a picture …” And later: I like it.

An appreciation of the exhibition from the competent guest creates new ideas and desire to make them real in the best way.

I have brought three old Japanese newspapers to make the exposition more interesting. There was “Yomiuri Shinbun” dated 2012 among these newspapers. Once Keniti Ogata, the Chef of Moscow Bureau of “Yomiuri”, has arrived to the exhibition… He saw this newspaper, took it in his hands, opened it and found two articles, written by himself 4 years ago! There was a wish to exclaim “Everything is so close in the World! And a lot of things are connected ingeniously.”

The highlight of the opening

In the opinion of many guests, the bright number was a welcome piece “Like a bird” by Tadao Sawai played on the traditional Japanese musical instrument KOTO by Natalya Golubinskaya, the musician of the Japanese Music Ensemble “WA-ON” in Moscow Conservatory.  Some guests had a desire to fly, some of them to learn how to play as magically as Natalya.

It was the first exhibition for everyone and in general, it was successful! We gathered a lot of positive feedback and wishes to move further and continue talking about Japan and Japanese with the help of photos.

Thanks for a chance to see the fragments of Japanese civilization.

Natasha, thanks for the exhibition! Everyone was pleased to see the photos.

Many thanks for the invitation, it was a pleasure to visit your exhibition! I wish you success in this creative process and new trips to Japan.

My dear artist, it was a wonderful exhibition! You made us feel good enriching us with new knowledge and magic music. Thanks!

Special thanks to Lyudmila (gallery owner) for a warm atmosphere.

Thanks a lot! Very positive exposition that took me back to the memories of my stay in Japan. Best wishes for the continuation.

I was surprised that the photos don’t look like the ones in the tourist brochures. These are alive photos with their own mood. It was a great pleasure to visit the exhibition. Thanks!

Thank you for a beautiful exhibition.

I was very surprised by the photo which was taken at Karafuto in the 1930s.

Thank you for inviting!

It is an interesting exhibition with enjoyable photos from the view where Japanese people are not aware of.

Wonderful, amazing photos! Interesting faces and moments: little kids, hiding under umbrella from a strong rain; woman, looking into the distance at the viewpoint, ricksha. Everything expresses the spirit of Japan.

The photos were a great complement to the conference to create a true Japanese atmosphere. Thank you!

Natalya Ushakova surprised me again – now as an artist of her photos. I had the feeling that I had been visiting the streets of Japan and talking to its inhabitants. I also liked the decoration of the exhibition: it was an ideal ambiance for the perception of her work.

I believe that this is the beginning of a successful and creative path for the author and her future projects.

I am excited! It was a real pleasure to see the photos, I learned a lot!

Many thanks for the positive moments. The wedding photos are my favourite!